Research in the Yang Lab 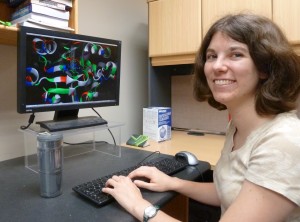 DNA base extrusion:  The trajectory describes the minimum free energy path optimization of the process of a base extrusion from a canonical double strand DNA. It is based on the on-the-path random walk simulation method developed in the Yang group.

About the Wei Yang Lab
From the FSU “Research Spotlight”:  Biochemists have long dreamed of using computer simulations to provide an atomic level view of complex biochemical systems. These simulations would act like a microscope to reveal complex biochemical interactions. Many well-known supercomputers, including IBM’s “Blue Gene” and “Anton” at DE Shaw Research, were architected specifically to achieve that application.

However, a challenge that even the enormous supercomputers face is the so-called “time-scale” problem – that is, modeling complex biochemical interactions over a long enough period of time in order to capture significant biological processes. This is the challenge that Dr. Wei Yang and his team of researchers in the Department of Chemistry and Biochemistry and the Institute of Molecular Biophysics at Florida State University are working to overcome.

“Imagine trying to understand anything about a person from a two-second film clip,” explains Dr. Yang. “You would need a much longer time reel to understand that person’s behavior. Likewise, modeling a single biological function requires billions samples of information.” When working with biological systems, a single second needs to be shaved down to tiny time fragments – 10E-15 in fact – each containing large amounts of information.

Using the Florida State Research Computing Center’s High Performance Computing (HPC) Cluster and some innovative modeling algorithms, Dr. Yang and his team have not only achieved long-timescale biological simulations, but have also shown that it can be done using commodity hardware and standard software tools. These techniques will enable much more research to be done much more cheaply by many more scientists.

Dr. Yang credits the Research Computing Center for enabling his research. “We’ve been using HPC since it became a service in 2007. It is the best system for this kind of work that I’ve ever used.”