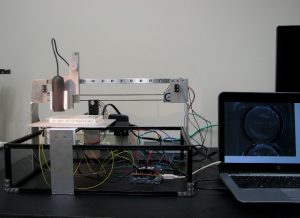 In January 2017, we started our work on second version of the dual axis Imager. In this version we have replaced the threaded screws with belt and pulleys. We hoped to avoid the small off-axis motion observed during movement of the plates due small bends inherently found even on good quality threaded rods.

We also wanted to keep the plate platform more open so that different types of plates could be observed. The preliminary design was completed in mid August 2017 and the working version was completed toward the end of 2017. 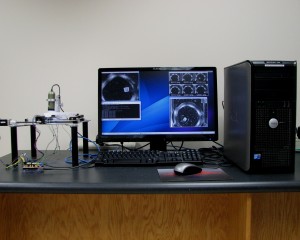 In January 2016, we started to offer automated scanning and storing of images of 96-reservoir-3-well or 96-reservoir-2-well ARI Intelliplate crystallization screens using our home built IMB designed Simple Robotic Imager (SRI). The robotic imager is housed in KLB 412 and is shown on the left collecting data on an ARI 102-0001-20 using a Linux computer. 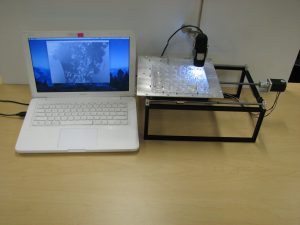 In June 2016, we started to work on a mono axis version for scanning and storing of images of 24-reservoir-1-well VDX crystallization plates using our home built IMB designed Simple Robotic Imager (SRI). The work is currently progressing. We presented a poster at the 2017 FSU College of Medicine’s Life Sciences Symposium about this version of the imager.

General and zoomed views of wells

How we got here

The idea started in 2014 when I attended the first FSU Stacking Layers Conference I and continued with FSU’s 3-D Printing Group. Then in July 2014 we installed the Art Robbins Instruments Crystal Gryphon 96-reservoir crystallization  robot in Kasha Laboratory (aka Institute of Molecular Biophysics), Room Number 412 .

ARI Crystal Gryphon increased our throughput in setting up crystal screens from 24 wells/plate to 288 wells/plate and decreased the time per plate from 90 minutes to 10 minutes. This provided the impetus to acquire an automated imager. However, commercial imagers cost ranged from $40 k to $55 k and we had just spent money in getting an automated crystal set-up robot. So I thought of the idea of designing our own robot. 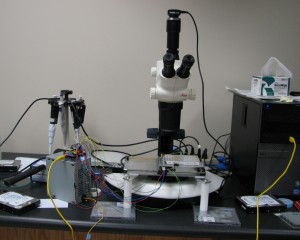 The monthly 3-D Printing Group meetings allowed me to visualize some designs. So I came up with idea of using a 2-d stage from the 3-d printing technology (additive manufacturing) to build our own automated imager. My colleague Ian at Physics Department made a prototype using his skills in designing and building his own 3-d printers. We envisioned that we will be using LabView to control it. Then in 2015 at FSU’s second Stacking Layers II  conference, my colleague Mike at IMB  picked up the idea of making use of Arduino for controlling the robot. So we combined homebuilt the 2-d stage and our existing Leica S8 APO stereo zoom microscope with ThorLabs 1645C USB camera (shown on the right) to visualize the sample. 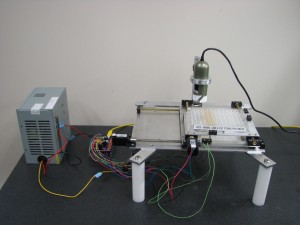 But  about the same time at 2015 Pittcon, in New Orleans, LA,  I found a low-cost USB microscope from Dino-lite. We then combined all these ideas and assembled a second working version that incorporated this low-cost scope rather than the expensive Leica scope. The reasoning behind was that most of our protein “hits” during the screening process were colorless crystals measuring tens of micrometers or larger. So a simple 100-150 time magnification would be sufficient and another added advantage was that this scope had its own lighting and software to acquire images through its USB cable. So our second version looked somewhat similar the one shown on the left. The Arduino controller was combined with CNC-Shield which is a GRBL, G-code compliant open source motor driver usually used in CNC machines. 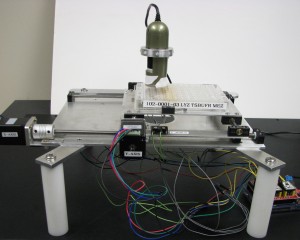 We then tweaked this version by replacing the brass screws with sturdier stainless steel screws, replaced the smaller stepper motor with a larger one and added flexible couplers to reduce the wobble. We added dedicated power plug for the Arduino controller.  We had originally removed the scope nozzle. We now added to semi-transparent disc to distribute the LED light. We also went through several versions of control software written using Python and Open CV libraries. 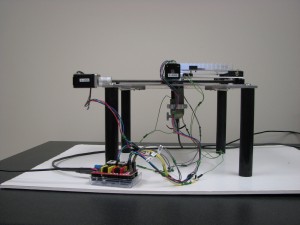 SRI with imaging from the bottom

We then went on to expand the application of screening crystals to imaging cells. The homebuilt SRI was originally designed to use the reflected light from the scope’s LED and viewing it from the top of an Intelliplate’s wells. Now we needed to image a bottom of a BrandTech 781722 96-reservoir using transmitted light. The application extension in fact didn’t come with larger modification but for two simple alterations: 1) we increased the height of the legs of the imager, and 2) we flipped the rack-and-pinion mount of the Dino-lite  from the bottom instead from the top. However, minor software adjustments to the code were needed to go from 96-reservoir-3-well plate to 96-reservoir-1-well plate. This modified design is still being tweaked get additional lighting from the top. This modified version of our imager is shown on the left (work in progress).