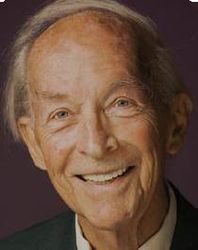 Dr. Kasha was a Florida State University Lawton Distinguished Professor and Professor Emeritus. He was Co-Founder and first Director of the Institute of Molecular Biophysics. Professor Kasha was a member of the National Academy of Sciences (1971), the American Academy of Arts & Sciences (1963) and recipient of the R. S. Mulliken Medal (Molecular Spectroscopy), the G. Porter Medal (Photochemistry), and the A. Jablonski Award (Molecular Photophysics).

Dr. Kasha was born on Dec. 6, 1920 and died on June 12, 2013 at the age of 92.  His influence and importance continues, both around the world and at Florida State University. The Institute of Molecular Biophysics honored him by naming the building the Kasha Laboratory Building and the Molecular Biophysics Graduate Program  has also named a prestigious graduate student award in his honor. The Kasha Award and Seminar has been held each Spring since 1995 to recognize excellence in student authored publications.

Instrumental in founding IMB in 1959, Dr. Kasha worked tirelessly during his career to promote interdisciplinary and collaborative research among scientists with expertise in different areas. His interest was in creating a place for faculty and students to explore the cutting edge of research in a state-of-the-art facility, which continues today at FSU and serves as a model for the development of other interdisciplinary programs. In 2001 the building that houses the Institute of Molecular Biophysics was renamed the Kasha Laboratory Building. The Institute continues to thrive and build on the foundations of the original vision.

Dr. Kasha earned his Ph.D. at the University of California, Berkeley (1945), under the mentorship of Dr. Gilbert Lewis, well known for the discovery of the covalent bond and his concept of electron pairs. Lewis dot structures and other contributions to valence bond theory have shaped modern theories of chemical bonding. Lewis contributed to the advancement of scientific knowledge of thermodynamics, photochemistry, and isotope separation, and is also known for his concept of acids and bases.

The research in Dr. Kasha’s molecular spectroscopy laboratory was instrumental in the discovery and elucidation of excitation mechanisms, with particular application to photochemical and biophysical problems. Some of his most important achievements include identifying triplet states as source of phosphorescence emission, his work on singlet molecular oxygen, and formulating the Kasha rule on fluorescence. The Kasha rule was first proposed by Dr. Kasha in 1950 and is now accepted as a general scientific principle, with only a few rare exceptions found over the years. In 1971 Dr. Kasha joined a select group of scientists when he was elected to the National Academy of Sciences.

He led a long and illustrious research career with many adventures along the way, including a 30-year long collaboration with Richard Schneider, a master builder of traditional classical guitars.  This led to a new design that became known as the Kasha Guitar. In his spare time, Dr. Kasha spent many years searching for a way to hybridize a truly blue daylily. He published a book in 1978 about his efforts called “The Elusive Blue Daylily,” which remains elusive to this day.2014