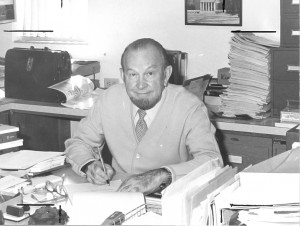 Dr. J. Herbert Taylor was director of the Institute for Molecular Biophysics and recipient of the highest honor Florida State University can bestow upon its faculty, the Robert O. Lawton Distinguished Professor award. Taylor’s career spanned more than 50 years, during a time of phenomenal change in the fields of genetics and cell biology. His groundbreaking contributions to the knowledge of chromosome structure and reproduction produced many methods now standard in genetics. Taylor’s early work in the mid-1950’s helped to prove that DNA was the genetic material of the chromosome, by demonstrating that a radioactive label incorporated into DNA could be visualized in the autoradiograms of chromosomes.

He was among a group of 16 scientists who founded the American Society of Cell Biology in 1960. He published more than 100 papers on chromosome structure and reproduction. In recognition of a lifetime of work, he was elected to the National Academy of Sciences in 1977. The methods Taylor developed with his wife and colleague, Shirley Taylor, revolutionized the study of chromosomes. As stated in the dedication of the 2006 Cold Spring Harbor Press text book on DNA Replication: “Taylor comes as close as anyone to being the father of the field.”