We have laboratories in the Institute of Molecular Biophysics and at the National High Magnetic Field Laboratory (NHMFL), which is the center of research in the U.S. for the development and application of instrumentation using high magnetic fields. The NHMFL provides for large scale integration of the technical and conceptual aspects of EPR, NMR, MRI and ICR spectroscopies. 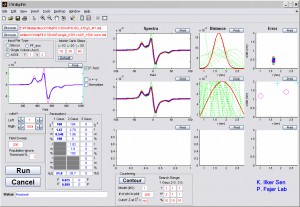 The long-term goal of this project is to understand the energy transduction of ATP into mechanical work in muscle. The atomic structure of the myosin head, which was recently determined by Ivan Rayment and coworkers, provides a structural framework within which structure-function questions can be asked. As in any motor, it is reasonable to expect that some parts of the system will be moving, and that some of these motions will be directly resulting in the generation of force. The problem might be trivially summarized as where, when and whether?

Muscle contraction is initiated by the binding of Ca2+ to the thin filament. This signal somehow results in a changed interaction between the myosin head and actin. Since Ca2+ binds to troponin C, a protein which is not in direct contact with either myosin or actin, the signal must be propagated via the other regulatory proteins, troponin I, troponin T and tropomyosin. The nature of these interactions is not well understood. In solution Ca-binding proteins containing E-F hands analogous to troponin C undergo large structural changes. The conformational freedom of troponin C in complex with the proteins of the thin filament is greatly restricted and changes are more subtle. They involve changes in the mobility of constituent proteins and their relative geometries. The questions asked and the general strategy to answer them is similar to those described above for energy transduction–identify and describe the motions within the proteins, and correlate them with thin filament activation. The technical challenge of this area is somewhat greater than for the acto-myosin system: the various components have to be isolated (or expressed) and labeled in solution followed by the reconstitution of the regulatory system. The advantages of this approach are many fold: (a) structural changes can be tracked through different levels of organization: isolated proteins, binary, ternary complexes, thin filaments and finally muscle; (b) probes are more specifically targeted including doubly labeled complexes for fluorescence energy transfer; (c) new targeting sites are introduced by site specific mutagenesis.

The EPR technique is unique insofar that it provides orientational and motional information about specific sites within a molecule. It has a sensitivity advantage over NMR, (as little as 100 picomoles of sample can be used) and a spectral resolution advantage over optical techniques, (since the molecules oriented differently in space are resonating at different magnetic fields). My lab is involved in the development of various aspects of EPR: