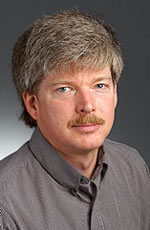 My laboratory seeks to understand the molecular basis of regulation of cell division and apoptosis, with special emphasis on the role of tumor suppressor proteins in these vital biological processes.  We apply structural biology and biophysical techniques (NMR spectroscopy, x-ray crystallography, calorimetry, AUC, etc.), as well as biochemical and cell biological methods, to study the details of biomolecular mechanisms from the test tube to cells. Of particular interest is the role of intrinsic protein flexibility in regulatory mechanisms.

p21 and p27 are small proteins that regulate cyclin-dependent kinases (Cdks), the master timekeepers of cell division. p21 and p27 are intrinsically unfolded, or disordered, in isolation and fold upon binding their cyclin/Cdk targets. Past studies have shown that the folding-upon-binding process is sequential and that this mediates specificity for particular Cdk/cyclin complexes. Recently, we discovered that tyrosine kinases (e.g. the leukemogenic kinase, BCR-ABL) directly regulate the inhibitory activity and stability of p27, leading to the concept that p27, and other intrinsically disordered proteins, serve as molecular conduits for signal transduction. In addition to BCR-ABL, a number of other oncogenic tyrosine kinases (e.g. Src and Lyn) have recently been shown to phosphorylate p27 in association with human cancer. Our continuing studies are focused on fully understanding the mechanistic role of the p27 signaling conduit in tumorigenesis.

A new project focuses on regulation of the intrinsic apoptotic pathway by the proteins, p53, BCL-xL and PUMA. Past studies by the Green laboratory at St. Jude have shown that PUMA is unique amongst BH3-only, pro-apoptotic proteins in causing the release of p53 from inactive complexes with BCL-xL.  However, the molecular details of this process have remained a mystery. Using NMR spectroscopy, x-ray crystallography, and a plethora of biochemical and cellular assays, we have discovered a novel molecular mechanism by which PUMA releases p53 from BCL-xL. This mechanism involves drastic, PUMA-induced structural remodeling of BCL-xL.  Continuing studies seek to understand the generality of this mechanism in apoptotic signaling. Further, we seek to understand at the atomic level how binding of PUMA to BCL-xL brings about the gross structural rearrangement that releases p53. Mutagenesis, calorimetry, biochemical and cellular assays, x-ray crystallography and NMR spectroscopy are being applied to understand the structural, dynamic and thermodynamic features of the PUMA-induced p53 release mechanism.